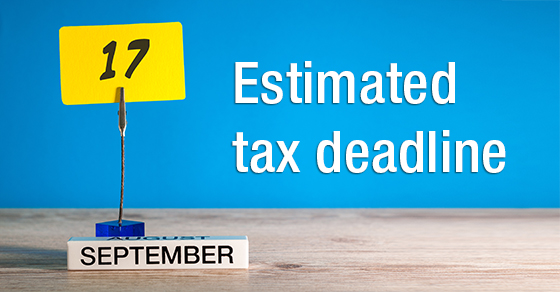 If you don’t have an employer withholding tax from your pay, you likely need to make estimated tax payments. But even if you do have withholding, you might need to pay estimated tax. If you have more than a nominal amount of income from sources such as  self-employment, interest, and dividends, you may need to.

A Two-Prong Test for Estimated Tax

Generally, you must pay estimated tax for 2018 if both of these statements apply:

1. You expect to owe at least $1,000 in tax after subtracting tax withholding and credits, and

If you’re a sole proprietor, partner or S corporation shareholder you generally have to make estimated tax payments. They are usually necessary if you expect to owe $1,000 or more in tax when you file your return.

Estimated tax payments are spaced through the year into four periods or due dates. Generally, the due dates are April 15, June 15 and September 15 of the tax year and January 15 of the next year. This is unless the date falls on a weekend or holiday (hence the September 17 deadline this year).

If you determine you don’t need to make estimated tax payments for 2018, it’s a good idea to confirm that the appropriate amount is being withheld from your paycheck. To reflect changes under the Tax Cuts and Jobs Act (TCJA), the IRS updated the tables that indicate how much employers should withhold from their employees’ pay, generally reducing the amount withheld.

The new tables might cause some taxpayers to not have enough withheld to pay their ultimate tax liabilities under the TCJA. The IRS has updated its withholding calculator (available at irs.gov) to assist taxpayers in reviewing their situations.

To learn more about estimated tax and withholding — and for help determining how much tax you should be paying during the year — contact us.

Copyright © 2022 Anderson & Whitney, PC - CPAs in Greeley CO.
Serving Greeley, Fort Collins, Cheyenne and Surrounding Areas
Website Design by Sage Marketing Group. | Privacy Policy | Terms of Use
We use cookies to improve user experience by remembering your preferences and repeat visits. By clicking “Accept”, you consent to the use of ALL the cookies. You may manage your preferences through “Cookie Settings” to provide a controlled consent.
Cookie settingsACCEPT
Manage consent